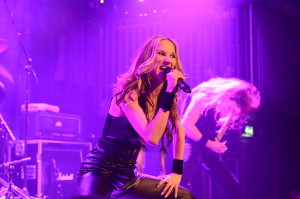 Now, I’ve heard many complaints about how metal has been taken over by symphonic metal bands and thus decreased the quality of metal. Huntress is not a symphonic metal, but a 2009-present traditional metal band.

Huntress is an American Metal band and is fronted by Jill Janus with Bake Meahl on lead guitar.
They currently only have two CDs and have been to Mayhem Festival 2013 ( I got to attend but sadly did not make it to see them.)

Their debut CD is the 2012 Spell Eater, with a total of 11 songs. The first song on the CD is that of the same title “Spell Eater” and was the first song I listened to from the band that made me a fan. The intro of the song has a nice strong guitar strumming along side a cool rhythm guitar melody. The drums follow shortly; this intro is nothing short from being bad ass. At about 0:30 the drums speed up and the guitar and rhythm guitar are dueling for the melody. Jill’s strong vocals then start at 0:34, leaving no time to get tired of the riffs and drums. Around the one minute mark, the guitar riffs change to this really cool melody but gives way to Jill’s strong voice so you are not overwhelmed. At 1;10 that changes into this really racing tempo for the lead guitar, right as Jill is not using her full vocal power. When she goes back to taking the focus, the guitar eases up. They really know how to be well balanced. If there was a way to copy the sounds of the riffs on to paper, I would…but would read “Bun duuuuun dun buh…digdiot do dit do do do DOOOOO” In English, the guitarist is pretty awesome. Specially since I lost hope for any American metal band out there. The whole purpose of the guitar riffs in this song is to convey power and greed and being unable to stop due to dying if the “spell eater” and her coven does. So it turns to not wanting to stop to not being able to.

“Night Rape” is another noteworthy song, however, there is not an official video for this song.
From 1:19 – 1:30, there is this maniacal riff before the vocals come back, following the riff with the lyrics “Can’t sleep can’t breathe”. The vocals describing victims and the riff adding the menacing atmosphere to the song. Starting at 1:45 there is a kickstarter to a longer guitar solo, which starts at 1:53 – 2:21, consisting of scales, shredding and string bending. Giving the song a new urgency besides the danger earlier in the song. Lyrics wise, I feel that “Night Rape” is about society forcing beliefs onto others, not actual rape. Or, you can go for the face value and say it is strictly fantasy lyrics talking about a demon summons gone terribly wrong. Either way, the lyrics are interesting even if they are a little short. And the song gives way to an awesome guitar solo due to how short lyrically it is.

“Terror” is another song from the first CD, the 9th track, actually. The very start of the song, the guitar and drums live up to the title, portraying, terror; shit is about to get real. “No one stays alive” is part of the beginning lyrics…”this is war, you will never get out” is after. The guitars definitely scream that this is strictly war and you won’t be able to fight back. Throughout the song, the guitarist adlibs quite frequently and nicely at that. At 2:05 the guitar solo starts, and it is powerful and distorted and angry and ends at 2:30. Jill’s growl at this point was pretty sweet at that too. Starting at 4:00, the rest of the song is instrumental, telling the listener it was not a very good outcome for those who were attacked. The guitar riffs throughout the end were well worth the wait. One of the best songs to listen to the guitarist in my opinion.

The Second CD is Starbound Beast from 2013, 11 tracks as well, the last track (gasping) a Judas Priest cover! In this CD, there is another guitarist, Anthony Crocamo. You can hear the two different styles of the guitarist throughout the tracks of the CD; it is really awesome to have two guitarists teaming up with two different styles! It gives a cool effect, like that in the song “Blood Sisters”. It is in the whole song, where you can hear the two distinctively. The song is not very thrilling, but musically speaking, especially the beginning until 0:28, the musicians are really talented. This seems to just be on the CD just to show off her band, which doesn’t happen often in a CD.

So, the next song is “I Want to Fuck You to Death”, The vocals are the main point in this song, and rightly so, she is amazing. And then at 2:01, the guitar solo reaps out even more lust to the listener. Back to the song though, at first listen, you will think it is just about, well, sex. However, to me, I hear this coming from a succubus, because “Let me suck your breath”. Succubi, are the female versions of Incubi. Both use sex to drain life out of the person they seduced and they cannot reproduce; so either way it is a provocative song indeed. The guitar solo really makes me want to dance and I can see this being used in a strip club. Not for the obvious reasons honestly, but for the guitar solo, which ends at 2:28. This song should also be noted for having the lowest note I’ve heard her sing so far. The ending instrumentals are pretty fun and her echo of the title until 3:30 is a nice touch and then it just ends. The guitarists do a splendid job all the way up to the last second of the track.

The Last song to judge is…the Judas Priest cover! “Running Wild”. She is very grudging and growly in the song, an aspect I don’t really enjoy. But the long notes she gets to hold out, has nice vibrato. The guitarists and drums have no issue covering this song and they seem perfect.
I wish, vocally, she would have just sang it. Because there is a couple of notes I hear that she is just amazing on and then she starts doing the growly thing. Otherwise, the musicians did perfectly and Jill, not so much.

The rest of the second CD is amazing along with the rest of the first. The Guitarists are fun and talented and the metal style is refreshing since metal is being overrun by “bands” like Cannibal Corpse.

Review by Bridget. Bridget is a professional writer. Her hobbies include guns, knives, and archery. Image of Huntress by Floris Looijesteijn. Licensed under CC 2.0. Thanks Floris! Picture of Bridget used by her permission