Have you ever heard of the Electric Mistress guitar pedal? If not, you need to. It’s a guitar effects pedal by Electro-Harmonix that features both chorus and flanger guitar effects.

I stumbled upon the company by accident. I was trying to see if anyone still made effects pedals in America. It’s something that’s important to me. As someone who has had their job sent overseas, I care about American workers.

Anyways, you could be out of the country. Or you don’t care. Whatever. You’re probably only concerned about whether or not it sounds good. Which is fine.

So enough about politics. I’ll talk about the pedal itself.

The Electric Mistress is a guitar pedal that has both chorus and flanger effects. You could set the chorus all the way up and the flanger at 25%, reverse that, use all or not, or whatever. It’s very versatile as you can play around with any combination of those effects.

How does it sound? Watch the video:

I rarely use effects. Therefore, there’s not much of a sample of me using it on our debut album. It’s because I generally plug in straight to the amp.

However, if you’re an effects guy, definitely check out the video. I go in depth and give plenty of example of its usage.

Roman is the founder of the band Astral Eyes and the Romantic Metal genre. 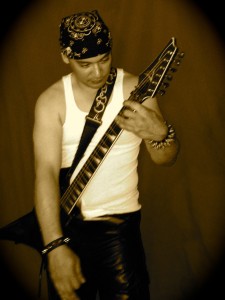