Remember 80s Metal? For awhile there, Neo-Classical got really big and you guessed it, that’s why we’re going over the Harmonic Minor scale. The Harmonic Minor scale was the most used scale by the Neo-Classical Metal guitarists of the 80s, until of course in the late-80s, someone gave them a memo to all start learning Jazz Fusion and Metal started getting really weird.

Well, here’s an ode to the 80s before things got really weird. It’s one of the three scales I warm up with in the morning.

What is the Harmonic Minor scale?

Simply put, it’s the minor scale with the seventh note sharped. Yes, it’s that easy. That’s what gives it that exotic sound. 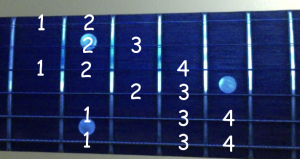 Once again, I used E because it’s easier. You get two dots so you can see exactly where it is on the guitar.

Learn the pattern. Play it forwards and backwards. Then start playing it in other keys on the fretboard.

Like always, go for accuracy first. Learn it and get the scale to flow well. The speed will come. Get accuracy down first. Learn it correctly before building up your speed. That’s very important and I can’t emphasize how important that is. Very few things sound worse than a fast player who’s missing all over the place. That stuff sounds like crap. (Don’t be that guy).

Once you’ve mastered it, build it into licks and runs. Throw in some bends. Heck, incorporate it into your riffs. Riffs built off the Harmonic Minor scale sound really cool.

Randy Rhoads used this scale in one of my favorite Ozzy Osbourne songs – Revelations. This scale is what gives the song such an exotic sound.

Enjoy! There’s no limit what you can do with this scale. 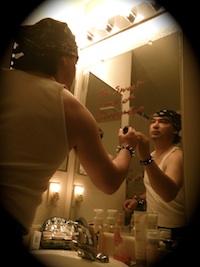 Roman writes the orchestrations for Astral Eyes. He plays Guitar and Piano and has a Bachelor’s degree in History.